The Mistake That Costs You Media Coverage and Market Domination

I don’t generally consider myself a betting (wo)man. I cemented that opinion of myself after an unfortunate incidence in Puerto Rico following a medtech industry workshop several years ago (back when you could still have industry events in fun places). We were out with some surgeons at a casino and lots of fun and drinks were being had. I was a spectator (to the gambling) until one of the surgeons asked me to play his hand while he went to the bathroom. He had amassed what appeared to be an inconceivable tower of chips while he’d been playing. I figured, “What could possibly go wrong in blackjack in 15 minutes?” I can now tell you with strong conviction. A lot. Like every single chip can be snapped up by the smirking dealer, causing the surgeon to return to his seat with a look of complete horror upon sizing up the scenario and me to want to change my name and move to a nearby island and crochet hammocks for the rest of my life. But I would happily place a wager that the following scenario has happened to you more times than you wish to admit.

You have a significant company or product milestone to share with the world. Often your vessel of choice is ye old faithful press release, which in many people’s minds should automatically result in massive media pick up. And the market will reward you for this achievement.

Except that doesn’t happen. You put out the press release and . . . . *crickets*. Few media outlets, if any, seem to register the news. You feel as if your news is better than or at least as good as other stories that are being picked up. It’s even worse if your competitor gets some type of media coverage and you get nada. You feel slighted. But your Board is pissed and they’re happy to send you an email to let you know the depth of their disappointment. And then you punt that email to the Marketing department or PR agency and demand an explanation. Because there must be one for such poor results.

But most life sciences executives don’t like the answer. They believe they have an awesome product poised to create a new paradigm shift. Except it’s not. It’s competing in an existing category and is trying to vie for the market’s attention to be the “the winner” or be “the best.” However, the market has already chosen a winner or decided who’s best, and to get them to change their mind is damn hard.

A press release isn’t going to change that. Not even a dozen will. But do you know what will? Being a “different” company.

Simply put, a “different” company is creating a new category and new value versus competing in an existing one to capture existing market share. Being “different” forces a choice while being “better” or “a winner” forces a comparison. And that’s not an enviable position to be in. It’s a position of weakness. It makes you compete on features and benefits instead of providing a different solution to a new and urgent problem. Being different makes you relevant. That’s what the media wants to cover.

Most life sciences companies say, “We’re creating a product and we’re going to introduce it to the world and they’re going to love it because we’ll explain why our widget is better than the competitor’s widget.” What that is from a business strategy is competing for demand in an existing category so you can drive your market share.

Working inside of pre-determined market constraints will only allow you to gain a small piece of the pie. Creating new opportunities or expanding into a new market will allow you to win the entire pie. That’s what legendary companies do. When you compete, you get one level of growth rate, success rate, and brand value. When you create, it’s exponentially greater. Look at the market cap of Tesla versus Ford. In 2020, Tesla’s market cap was 15 times greater than Ford’s. In fact, Tesla was close to achieving a $500 billion market cap, which makes it higher than the combined market cap of nine car brands: General Motors, Ford, Fiat Chrysler, Honda, Hyundai, Daimler AG, Ferrari, BMW, and Volkswagen.

Why is it different? One company (Tesla) is creating a whole new future with something different and creating net new demand. The other ones are betting on things staying the same and are taking a competing approach to business.

If you’re different, you’re the only company or product that exists like it. Marty Neumeier, the author of Zag, called it the “Onliness Statement” or what makes you “the only” brand in a category. He even gave us a simple template to help crystalize it: 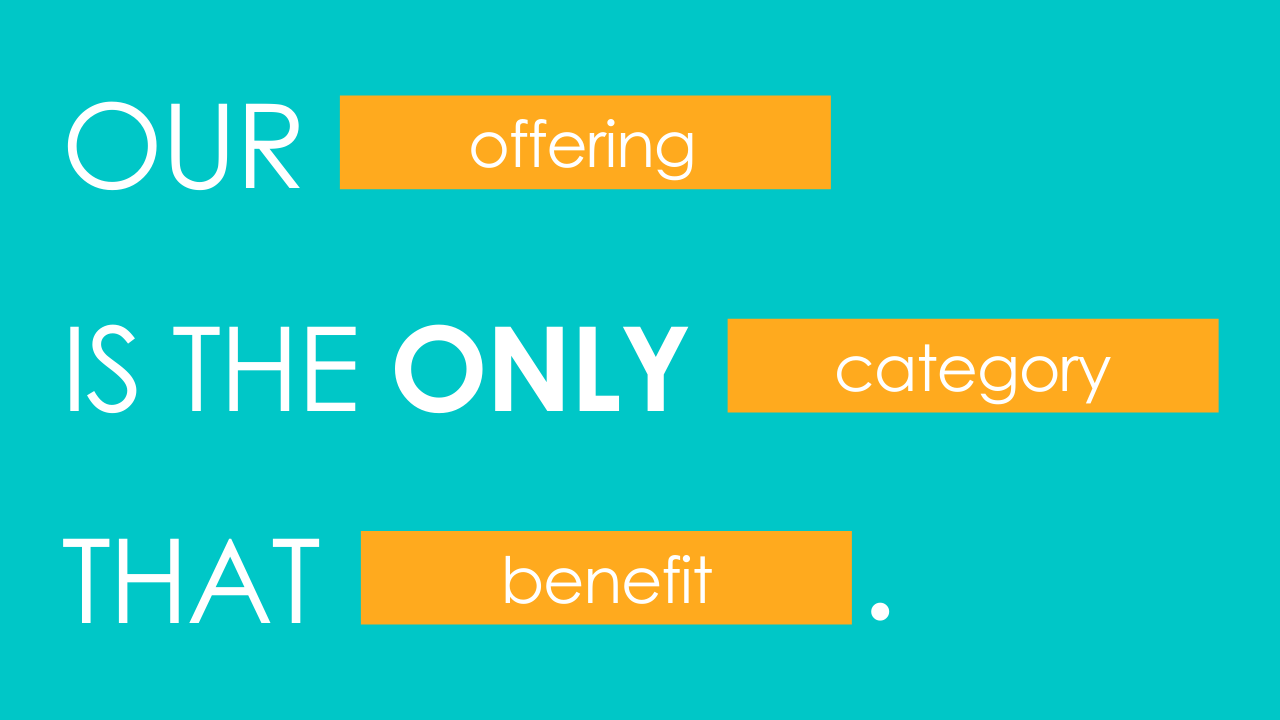 As Marty says, “Onliness is by far the most powerful test of a strategic position. Brands need strong positioning because customers have choices—if you don’t stand out, you lose. To win the positioning game, you must answer one simple question: What makes you the ‘only’?”

If you want to flush this out, try this exercise:

What: the only (category)

How: that (differentiation characteristic)

Where: in (market geography)

Why: who (customer need statement)

When: during (underlying trend)

Now, let’s use a real-world example with one of our clients.

What: The ONLY Instant UV disinfection device

How: that provides targeted, portable, and affordable hospital-grade UV disinfection in just one second

Who: for healthcare institutions, their patients and staff

Why: who want to end the dangerous and deadly spread of pathogens

When: in an era where pandemics will be the new normal

A super test of the Onliness Statement is to put a competitor’s name in and see if it’s still true. If it is then you don't have an Onliness. You have no point of difference. And if you aren’t different, people won’t change what they’re doing, including not covering your “innovation” in the media.

If you don't have Onliness, then fix it. Don't just use fancy, click-baity words. Innovate a customer-centric solution. Solutions don't exist without problems, right? Then problems don't exist without people. So, you must go back and understand the people you're trying to work with and serve to better understand the problem you're trying to solve and the language they use to describe that problem. You also need to understand the context for which they're trying to solve that problem. Many times, especially in healthcare, your audience isn’t even aware it’s a problem, or they think it's unsolvable because that’s how the status quo works. They’re doing their best and the problem must be someone else.

Driving Adoption With Your Different

People and therefore markets, by their very nature, resist new ideas and products. Markets kill most new products and services and accept the rest only begrudgingly. TV took three decades to become a mass medium in the U.S., from the first experimental broadcasts in the late 1920s to widespread acceptance in the 1960s. This is because humans crave what Nobel Prize winner John Nash termed equilibrium.

Equilibrium in a market lends stability to the players’ expectations, validates their choices, and reinforces their behaviors. When an innovation enters the market, it upsets the players’ expectations and choices and introduces uncertainty in decision making. A market’s hostility to innovations becomes stronger when players are interconnected. In a networked market, like the healthcare ecosystem, each participant will switch to a new product only when it believes others will do so, too. The players’ codependent behavior makes it tougher for companies to dislodge the status quo than if each participant were to act autonomously.

Legendary companies don’t just market their product and its features, hoping the world will “get” why the product was a breakthrough worth considering. They educate the market, including the media, about why things should be done in a new way, a different way. They use new language to market a new point of view (POV). They intuitively lead their markets by teaching customers how to think about a problem and thus why they should abandon old ways and embrace new ways.

If you aren’t different—and can’t effectively explain why and why it matters—then don’t expect the media to cover you. And certainly, don’t expect a new target customer to adopt your technology. You’re just not that compelling.

Want to get more media coverage?

Grey Matter Marketing is a full-service, award-winning PR and marketing agency working exclusively with life science companies. We make it easy for your audience to see the value of your new category. When done right, your solution becomes the obvious—and only—choice. Contact us and let us help you create a more effective PR strategy in 2021 and beyond.


Based on what you have read, we think you might like these posts as well
What Matters 2021: Issue #4
Sponsoring Virtual Events: Is It a Wise Idea?
Promoting Medical Devices Prior to FDA Approval or Clearance*